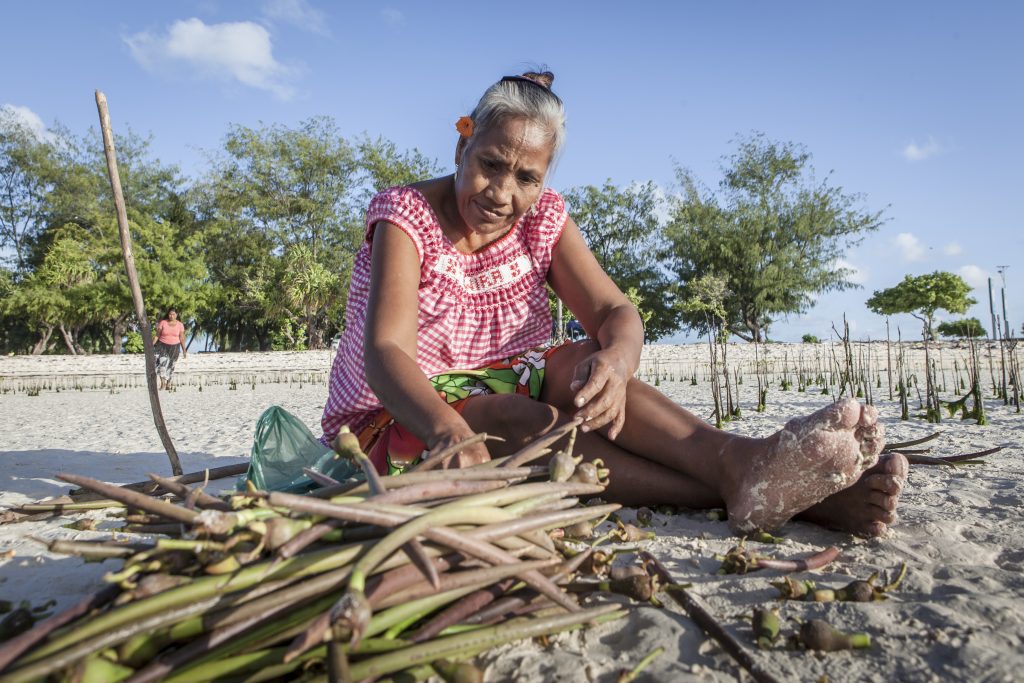 In summer 2018 the photographer Barbara Dombrowski traveled to the South Pacific islands of Kiribati and Rarotonga. The journey was both the conclusion of her photographic cycle “Tropic Ice_Dialog between Places Affected by Climate Change” and the starting point for a cycle of spectacular installations designed to draw attention to climate change and its consequences for culture and native people on five continents.

The images of the Kiribati archipelago are closely linked to the research of Silja Klepp, a geographer from Kiel. The Professor of Social Dynamics in Coastal and Marine Regions at Kiel University has spent several long research stays there, where she focused on the social and cultural consequences of climate change and examines questions of climate migration and adaptation.

The exhibition shows an excerpt from the documentation of Barbara Dombrowski’s journey and Silja Klepp’s personal contacts and places of research. The exhibition documents how the people on the South Pacific islands are affected by climate change, what adaptation measures they have taken and what strategies they are pursuing to avoid migration and to become refugees. In addition to the photo installations, Silja Klepp’s texts illustrate the challenges facing the population living with climate change, the consequences of which, such as rising sea levels, they have contributed least to.

The exhibition “Climate Justice in Kiribati” is part of the interdisciplinary workshop “Narratives and practices of environmental justice” at Kiel University, which brings together about 60 international scientists to discuss fundamental questions of environmental justice from different scientific perspectives. The workshop is organized by Silja Klepp, Florian DÃ¼nckmann and Jonas Hein from the Institute of Geography.

The Republic of Kiribati is an island state in the central Pacific made up of 32 atolls, with a population of around 110,000. Inequalities on different levels in the context of global climate change are adversely affecting developing countries such as the Republic of Kiribati. Kiribati’s inhabitants bear little responsibility for anthropogenic climate change, as their per capita emissions are low; nevertheless, they are heavily impacted by actual and expected environmental changes. The potential for conflict present within climate justice debates is especially apparent in discourses on the connections between climate change and mobility. Countries like Kiribati are often perceived to be the first victims of climate change and have to anticipate the future uninhabitability of their territory. Such countries claim global and regional solidarity to assist them in their search for mitigation efforts, adaptation financing and adequate long-term solutions for potential climate migrants.

Some environmental changes are already occurring, such as stronger and more frequent storm tides, coastal erosion, and the salinization of fresh water sources and agricultural land. Although the predicted sea-level rise has to take into account global, regional and local variables that make these predictions difficult, Pacific island states such as the Republic of Kiribati, Tuvalu, and the Marshall Islands are identified as being especially vulnerable. Some of these islands are less than one metre above sea level and have densely populated coastal areas. Sea level is expected to rise by 124 cm by the year 2100, and some researchers even predict a rise of 200 cm. Environmental changes could make the islands uninhabitable in the long run and threaten the sovereignty of some atoll states. The timing and predictions regarding the exact impacts remain uncertain.

Along with profound socio-economic problems and few opportunities for financing adaptation measures, Kiribati suffers from additional structural inequalities on various levels. These include for example, the impacts of colonization, including unsustainable phosphor exploitation, which displaced people in the 1940s as well as limited access to resources and social services. The participation and arrangement opportunities in international as well as regional political negotiations are also restricted.

On the global and regional level, the government of Kiribati is part of the large transnational movement for climate justice, which focuses on human rights and the cultural and environmental rights of indigenous peoples and minorities. The activities of this movement are often initiated by NGOs. For example, the network Climate Justice Now! was created in the frame of the UNFCCC negotiations in 2007 in Bali by more than 30 NGOs and grassroots organizations. The Peoples Agreement, created at the Peoples congress 2010 in Bolivia, demands far reaching rights of self-determination such as access to water, land rights and food production â€œthrough forms of production that are in harmony with Mother Earth and appropriate to local cultural ontextsâ€.

Inspired by similar thoughts and taking the post-colonial setting of Oceania into account, a growing number of voices in the Pacific area, in the context of the debates around climate justice, are calling for a new, transnational solidarity and unity to reduce the effects of climate change.

The dynamic discussions on climate justice show that the negotiation process in Kiribati and Oceania concerns itself with concrete, local, social and connective questions around climate justice. It includes decidedly migration-friendly perspectives and some actors are promoting a postcolonial questioning of national borders. In particular, climate justice must be linked to important post-colonial arguments concerning the political nature of the crisis faced by islands such as Kiribati. This applies to the debates and research around climate change and migration as well as to discussions and studies of adaptation to anthropogenic climate change. It must underline the call for mitigation efforts of industrialized countries and their support in financing climate change adaptation.

Based on texts written by Silja Klepp (Kiel University).

The women that plant mangroves in the Lagoon of South Tarawa, in the village of Ambo, are part of the Kiribati Climate Action Network (KiriCan). They are volunteers. After a long season of planting the saplings in the lagoon, of which only a part will root, the women are having a community party in the Maneba (community house) of Ambo.

Mangrove planting is an anticipatory adaptation action and a so-called soft coastal protection measure. It is undertaken to buffer coastal environments to reduce the vulnerability of coastal communities from the effects of climate change, including more severe storms and sea-level rise. Compared to hard protection measures, like sea walls, it is often more sustainable and provides employment to the communities. Today mangrovs are threatened by anthropogenic climate change and other human activities. Current and future changes in sea-level, storminess, rain, temperature, atmospheric CO2 concentration, ocean circulation patterns can all mean danger to mangroves. To date, climate change has likely been a smaller threat to mangroves compared to clearing for aquaculture, coastal development and pollution of coastal waters. Based on available evidence, of all the climate change outcomes, sea-level rise may be the greatest threat in the future.

Healthy mangrove forests not only mean coastal protection, but a great benefit also comes from the resources provided by mangrove forests. Mangroves perform valuable regional and site-specific functions. Mangrove loss will reduce coastal water quality, reduce biodiversity, eliminate fish and crustacean nursery habitat, adversely affect adjacent coastal habitat, and eliminate a major resource for human communities that rely on mangroves for numerous products and services. Reduced mangrove coverage and health will increase the threat to human safety and shoreline development from coastal hazards such as erosion, flooding, storm waves and surges, and tsunami, as some scientists have observed following the 2004 Indian Ocean tsunami.

Mangrove ecosystems were able to persist through the quaternary despite substantial disruptions from large sea-level fluctuations, demonstrating that mangroves are highly resilient to change over historic time scales. However, over the coming decades, mangrove vulnerability and responses to climate change will be highly influenced by anthropogenic disturbances. Mangrove cover on Pacific Islands have been reduced substantially in recent years. Adaptation measures like mangrove planting can offset anticipated mangrove losses and improve resistance and resilience to climate change. Coastal planning can adapt to facilitate mangrove migration with sea-level rise. With the replanting of mangroves and trees, it is hoped that South Tarawa, the capital and urban aggregation of Kiribati, will be protected from sea level rise, and king tides, as well as acting as future sources of fuelwood and building construction materials and fish breeding grounds.

Islands are recognized as uniquely exposed to climate change, now and in the future. Anthropogenic climate change challenges for island inhabitants include issues of water security, salinization of groundwater, stronger tropical-cyclone impacts and shoreline erosion and coastal flooding due to sea-level rise. Kiribati consists of 32 coral atolls and reef islands, as well as the raised limestone island Banaba. Current studies suggest that two thirds of the land are less than 2 m above mean sea level and maximum elevations are roughly 3 m. Adding to the risks for island communities created by anthropogenic climate change are a multitude of socio-economic vulnerabilities in Small Island Development States, such as Kiribati. These vulnerabilities are linked to the (post)-colonial structures and dependencies that persist, in various forms, until today. Among other factors, colonialism and globalization processes brought a change in lifestyles and a loss of local ecological knowledge and adaptation possibilities Island Style.

Coastal protection measures can be well suited to immediately protect coastal assets from inundation and protect from land loss during high water events. They can be divided into three categories: hard protection measures, soft measures, and retreat or migration. Hard measures include land reclamation and physical barriers like sea walls. Sea walls in Kiribati are normally built from coral rock, sand bags and concrete blocks. They represent most of the engineered coastal structures in South Tarawa, the capital of Kiribati. Most solutions for climate-change adaptation in Kiribati have been short-term, reflecting a dependence on project based and limited assistance from donor countries and a preference by consultants, engineers and many I-Kiribati for visible, technical solutions. In Kiribati, there is rarely sufficient data to adequately inform the design and positioning of protective structures.

Sea walls that are built in a wrong way, with cheap material and potentially in the wrong location can have disastrous consequences, invariably marked by the degradation of structures like sea walls and irreversible negative impacts. These impacts range from beach narrowing and beach loss to nearshore ecosystem degradation and biodiversity loss, which might also threaten food security for coastal inhabitants. Expensive, hard measures require regular maintenance; which is rarely provided by international cooperation that pays for the structures. There are so many broken, aid-funded sea walls, roads, and water systems in South Tarawa that a report labeled the atoll a “graveyard of shortlived infrastructure investments”.

Research shows that traditional knowledge and coping capacity on islands is likely to help people better adapt to future climate change. In addition to localized knowledge, it is important for those on islands involved in environmental governance to be aware of their unique attributes and specific local and regional environmental contexts. And, maybe most important, is to replace the commonly one-way direction of adaptation measures with genuine interaction in which both external agents and target communities have at least equal say in the design and implementation of adaptation pathways.

Based on texts written by Simon Donner (Fraser University, Vancouver, Canada) and Patrick Nunn (University of the Sunshine Coast, Australia).